The official discussion platform for FreeFileSync

Option "close the results dialog after sync" not appears

Sorry for my bad english.

I found in the following link that the option close results should be enabled but this option does not exist in FFS
https://freefilesync.org/manual.php?topic=command-line

These are the available options 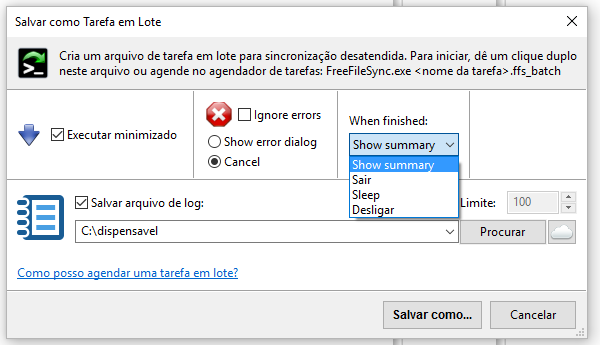 Can someone help me?

Thank you in advance.

You must save your configuration as a batch job.

Take a look at Batch Jobs in the Video Tutorials section of the site.

Also take a look at Tips and Tricks in the Manual and in the Video Tutorials section.

In FFS 9.5 is missing the "Close progress dialog" option available in previous versions!

The Exit option correspond to the old "Close progress dialog" option.
It does not mean "Logout".

The design between 9.4 and 9.5 has changed as follows:
9.4: "on completion" is executed after sync, but not if cancelled by user or error handling was set to "Stop".
The latter wasn't correct, consider you've set up a command line to shut down the PC, but when an error occurs the shut down is not happening.

9.4: "on completion" presented standard commands to shutdown/sleep/close progress dialog
This was problematic if you were primarily using a ffs_batch config, but then wanted to change a few settings and test your config via GUI: As a result, the computer shuts down unexpectedly, or closes the progress dialog which is also annoying.

9.5: The "shutdown/sleep" commands are moved from the old "on completion" to "When finished", a configuration option that is only available via the batch config dialog or can be dynamically set by the user during sync. The old "Close progress dialog" option was moved to "When finished: Exit". Thus it's now possible to exit FFS even in GUI mode, but it's not possible anymore to only close the progress dialog in GUI mode (which was mostly useless anyway).
Addtionally one can now "Run minimized" but "Show summary" when finished, which was not possible before.

I wish I had known about this before updating. I have no use for a summary screen and have always set FFS to close it automatically. 9.5 isn't going to work for what I need to do. Where can I get a copy of the 9.4 installer?

The Exit option is not ok?

No. I need the app to remain open.

but it is not the very latest 9.4 version.

I keep older versions of any software so I have uploaded to WeTransfer the very latest 9,4 for you:

Thanks, it is also my practice to keep old versions. This is one of the few times I didn't and I've been kicking myself.

ETA: By way of explanation, since the helpful folks at Android decided to hobble our devices with MTP I have relied on FFS to keep my phone and various other Android devices in synch. Unfortunately, the extremely unreliable nature of MTP means that many attempts fail and setting FFS 9.4 to close the progress dialog lets it automatically display any files that weren't updated. With FFS 9.5 I would have to re-open and do a full scan which, again due to the horrifically poor performance of MTP, can take several minutes. None of this is a failure on the part of FFS, in fact I find the new features very useful it's just that they don't work in my particular case.

Impossible not to mention the classic here :D

@Gianni1962
Summary shows something went wrong but doesn't specify which files are involved.