It looks like an ad blocker has blocked all the ads.

The FreeFileSync project is 100% dependent from ad revenue and donations to stay alive. Instead of the ads, and after FreeFileSync has proven useful to you, please think about supporting with a donation.

What are the basic steps to use FreeFileSync?
For more detailed explanations on how to set up the most common synchronization scenarios, have a look at the FreeFileSync video tutorials.

Where can I find information about FreeFileSync's advanced features?

For the most up to date description of FreeFileSync, visit the Online Manual. Press F1 while running FreeFileSync.

If internet access is not available, an offline version of the manual can be found in the FreeFileSync installation folder.

Are there limitations on the number of files to sync? FreeFileSync imposes no artificial limitations on how many files you can sync. Practically speaking, the only limiting factor for extremely large sync jobs is the amount of free memory available: For each 1 GB of RAM, FreeFileSync can synchronize roughly 1.7 million file pairs at a time.

Do I need to uninstall FreeFileSync before installing a newer version? No, you can safely install a new version of FreeFileSync into a directory that contains an old version. FreeFileSync will recognize the previous installation and clean up thoroughly should you choose to uninstall at a later time.

Should I use local or portable installation?

Thanks to everyone who is contributing to make this possible! 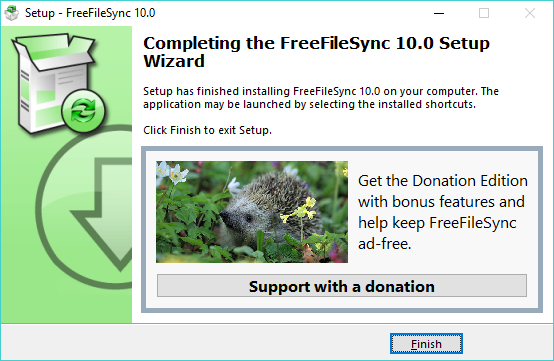 What are the benefits of the FreeFileSync Donation Edition?

Everyone who donates is offered a special version of FreeFileSync without any advertisements, including a number of bonus features. The FreeFileSync Donation Edition is a thank-you for supporting the FreeFileSync project!

After donating, you are automatically redirected to a page with the download link and a confirmation email is sent, too. Depending on the donation amount, the download page and auto-updater will remain active for a certain time to also download future updates of the FreeFileSync Donation Edition.
Just like the standard edition, the FreeFileSync Donation Edition has an unlimited usage duration, even when the update period has expired.

Donation amounts that are between or above the numbers shown in the table are calculated accordingly, e.g. a €15 donation corresponds to 8 months, a €100 donation to 5 years, etc.

The FreeFileSync Donation Edition is expected to be used by a single user (on up to 3 devices), but support for multiple users is available. This includes command line parameters that help to integrate into systems for mass deployment.

Note: Some anti-virus programs, most notably Norton by Symantec may falsely flag the installer as dangerous and delete it without providing further info. This is because Norton uses a so-called "reputation-based heuristic", which will simply delete all files that are not well known or commonly downloaded. This simple algorithm is expected to fail with the FreeFileSync Donation Edition which is not widely distributed by design. As a workaround, you can try to restore the deleted installer or use a smarter anti-virus program.

How can I get the Donation Edition for multiple users?

The FreeFileSync Donation Edition assumes a single user by default and allows installations on up to 3 of his computers.


Per-Computer Licensing
In order to extend the FreeFileSync Donation Edition to support installations on more than 3 devices, please use the donation buttons on the right:

Disables the update prompt when a new FreeFileSync version is available. Instead updates are expected to be installed by a deployment system.

My virus scanner/firewall shows a scary warning. Is there a virus, malware, or trojan?

No, the FreeFileSync installer never contains malware or viruses. Both firewalls and virus scanners work with heuristics in addition to searching for known virus patterns. Heuristics are generic algorithms that try to identify malicious behavior by evaluating certain program characteristics according to their proprietary implementation. Often, it is already sufficient to have a program access the internet to get this classification. By their very nature, heuristics cannot be exact and frequently lead to false-positive detections. Occasionally FreeFileSync is a victim of this.

In practice, however, one can distinguish real malware threats from heuristic alerts as they contain phrases like *gen*, *generic*, *heur*, *heuristic* or *reputation* as part of the threat signature name. McAfee uses the term *artemis* instead of *heuristic*. For example
Trojan.Win32.Generic!BT, Heur.AdvML.B, WS.Reputation.1 or Artemis!24FFD34B2F78 are typical names used for AV heuristics.

In any case, when in doubt never trust a single anti-virus software and use an online mass virus scanner for comparison.

How can I report bugs or suggest new features?

The best place to get in contact is via the FreeFileSync Forum. This allows for other FreeFileSync users to share their experience and give immediate feedback. A lot of problems have already been discussed and solved, so searching the forum may be the quickest way to get help.

FreeFileSync has crashed/is hanging! How can I help with trouble shooting? Usually, FreeFileSync will generate a mini dump file automatically when it detects a program crash. This file can then be sent to the FreeFileSync development team for further analysis. In some situations this will not work correctly, for example, if the process is hanging for a long time rather than crashing directly. In this case, you can create a dump file manually as follows:

2. Next, compress the .dmp file as zip or rar and send it to If the attachment's size is too large for email, upload it to some free file hoster and send the link instead.

If creating the dump file fails with Access denied, check that Process Explorer is running with elevated rights: Menu → File → Show Details for All Processes How can I record a trace file for troubleshooting file access errors? Windows:
1. Download Process Monitor and start it with filter settings reset to default. Now retry the operation with FreeFileSync that you want to trace, switch back to Process Monitor and save the trace as a .pml file.

2. You may compress this file as zip or rar and send it to If the attachment's size is too large for email, upload it to some free file hoster and send the link instead.

Why are network shares not found when synchronizing via Task Scheduler? 1. Test access rights: Make sure the network share was set up correctly by testing access manually with Windows Explorer and FreeFileSync.

2. Check user account: Verify that Task Scheduler is using the same user account that you used during your manual testing.

3. Use UNC syntax (\\server\share): If you have mapped a network share to a local drive letter, and have set up Windows Task Scheduler to use a different user account, FreeFileSync will not be able to see the network mapping.
Access may fail even when the user account is the same, see the caveat below.

Mapped network drives are tied to a specific user session and other user accounts do not have access. In fact they may have mapped the same drive letters to completely different network shares.

Solution: Don't use drive mappings, but UNC syntax instead. You can switch between the two path formats from the drop down menu of FreeFileSync's folder input fields:

Caveat: Even if you are using the very same user in both Task Scheduler and in your testing, FreeFileSync may still fail to access a mapped network drive when run from the Scheduler:
For example, if you've created a non-persistent drive mapping ("Reconnect at sign-in" unchecked), the mapping will be visible only to the current user session and not to other sessions. 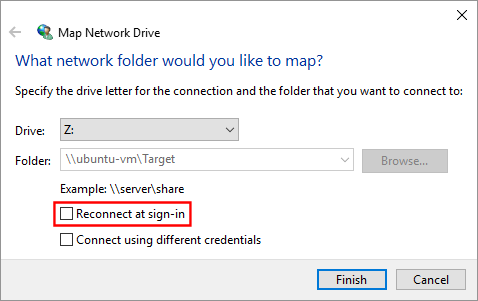 Now if you have enabled "Run with highest privileges" in Task Scheduler, a new user session with elevated rights will be created. This session corresponds to the same user account, but it will not have access to the non-persistent drive mapping, because it's a different session after all.
Had you used a persistent drive mapping instead or not run with highest privileges, this scenario would have worked.

Why does Windows Explorer show a different number of items? When synchronizing with FreeFileSync and comparing the number of items of the source and target folders with Windows Explorer, consider the following possible explanations for a mismatch.
If you still find yourself unable to explain the difference, drill down into specific folders with both applications until you find an actual file/folder that is handled differently. This should reveal what the problem is.
How can I fix the error "Cannot read/write permissions of <file path>"? 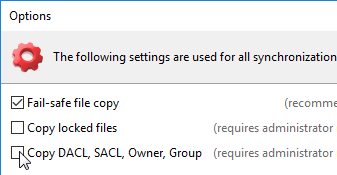 Copying NTFS permissions is not needed in general and is best left disabled. Go to Menu → tools → options and ensure permission copying is unchecked.
If you are an administrator and really need to preserve DACL, SACL, Owner and Group permissions, make sure the FreeFileSync process is running with admin rights.
Why are some files still different after synchronization? Certain system software has the unfortunate habit of adding hidden alternate data streams (ADS) to newly created files. The files' modification times are then set to the current time as a consequence of this write access. Since this happens directly after FreeFileSync has copied the files, the next comparison will detect this modification just like any other external change.

To resolve this problem you first need to identify which software is responsible for the file changes by using a tool like Process Monitor. Then see if the software has options to disable the unwanted behavior. If not, you can try to file a bug report on the software's support web site, or if nothing else helps, see if you can replace it with an alternative that does not underhandedly modify files.

I have deleted files accidentally. How can I restore them? This depends on how you have set up deletion handling in synchronization settings: