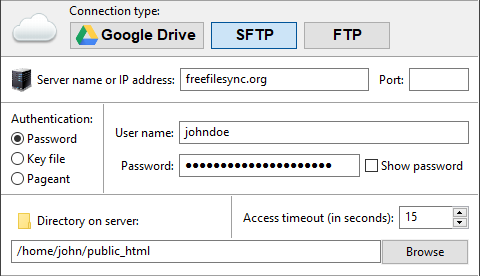 Note
In case the (S)FTP server sets file modification times to the current time you can do a Compare by File Size as a workaround. Another solution is to set up the Two way variant and have the files with the newer dates be copied back from the server during the next synchronization.

By default, FreeFileSync creates one connection to the server and uses one SFTP channel, i.e. only a single SFTP command can be sent and received at a time. Since most of this time is spent waiting due to the high latency of the remote connection, you can speed up reading large folder hierarchies by increasing both the connection and channel count.

The folder reading time is reduced by a factor of N x M when using N connections with M channels each.

Advice
Start with low numbers and make tests with different combinations of connections and channels for your particular SFTP synchronization scenario to see what gives the highest speed. Note, however, that FreeFileSync reuses existing SFTP connections/channels. Therefore, you should restart FreeFileSync before measuring SFTP speed.