The function of RealTimeSync is to execute a command line each time it detects changes in one of the monitored directories, or when a directory becomes available (e. g. insert of a USB-stick). Usually this command line will trigger a FreeFileSync batch job.

RealTimeSync receives change notifications directly from the operating system in order to avoid the overhead of repeatedly polling for changes. Each time a file or folder is created/updated/deleted in the monitored directories or their sub directories, RealTimeSync waits until a user-configurable idle time has passed in which no further changes were detected, and then runs the command line. This makes sure the monitored folders are not in heavy use when starting a synchronization.

Start RealTimeSync.exe located in FreeFileSync's installation directory and enter the folders you want to monitor. Instead of doing this manually you can import an ffs_batch file via Menu → File → Open or simply via drag and drop. RealTimeSync will not only extract all directories relevant for synchronization, but will also set up the command line to execute the ffs_batch file each time changes are detected. Now press Start to begin monitoring. 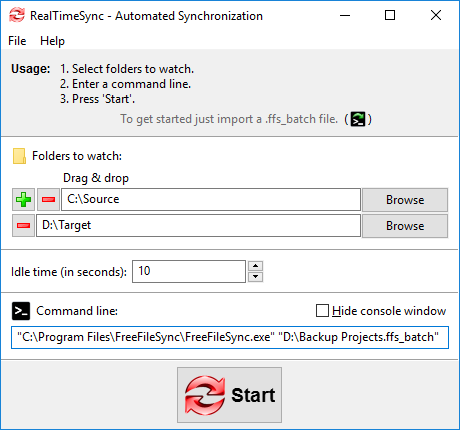 Example: Automatic synchronization when a USB stick is inserted

Save an ffs_batch configuration in the USB stick's root directory, e.g. H:\ and let FreeFileSync run it when the stick is mounted. But, instead of hard coding the USB drive letter H:\ (which may change occasionally), refer to the USB stick via its volume name instead. 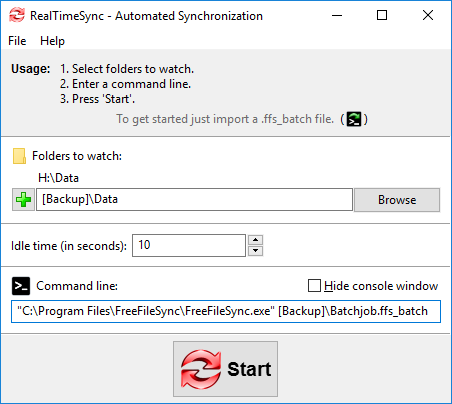 "Backup" is the volume name of the USB stick in our example.


Whenever directory H:\Data becomes available, RealTimeSync executes the command line which starts the batch job located on the stick. RealTimeSync will also trigger each time files are modified in H:\Data.
Note
The full path of the last changed file and the action that triggered the change notification (create, update or delete) are written to the environment variables %change_path% and %change_action%.
They are only visible for the command line that RealTimeSync is executing.


The command line usually starts a synchronization task using FreeFileSync which naturally leads to additional file change notifications. Therefore, the RealTimeSync change detection has to be deactivated to not go into an endless loop. On the other hand, it is not likely that changes (other than those from FreeFileSync) happen in first place since RealTimeSync runs the command line only after the user-specified idle time has passed. In any case, files changed during the execution of FreeFileSync will be synchronized the next time FreeFileSync runs.