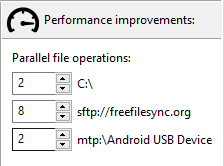 FreeFileSync can be set up to issue multiple file accesses in parallel. This speeds up synchronization times dramatically in cases where single I/O operations have significant latency (e.g. long response times on a slow network connection) or they cannot use the full bandwidth available (e.g. an FTP server enforcing a speed limit for each connection).

The number of parallel file operations that FreeFileSync should use can be set up for each device individually in the Comparison Settings dialog. It is evaluated for all folder pairs of a configuration as follows:

Note
FreeFileSync implements parallel file operations by opening multiple connections to a device. Some devices like SFTP servers have limits on how many connections they allow and will fail if too many are attempted; see (S)FTP Setup.